Tell someone to do something boring and you can tell them to watch grass grow. You might have the same reaction when we at the Gordon's Bay Scuba Diving Club (GBSDC) ask you to watch algae grow.

Believe us when we say it is interesting to watch algae grow and a thousand times more interesting than watching grass grow. Most of us would know algae as that green or brown slippery stuff that we see on boat ramps or steps into the sea. It is frequently mistakenly called moss. Many beaches, boat ramps, rocky foreshores, wharves and in fact almost any man made object which comes into contact with the ocean provides a suitable habitat for algae. 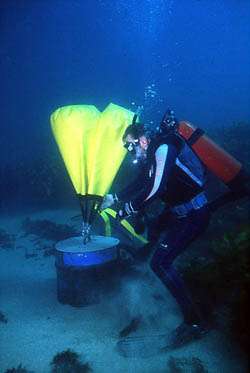 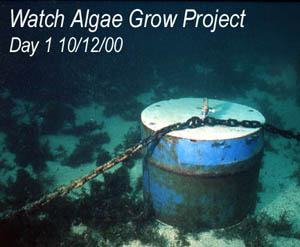 On a sunny Sunday in December 2000 we placed our fresh cement block in Gordons Bay and sat back, to watch the fun. 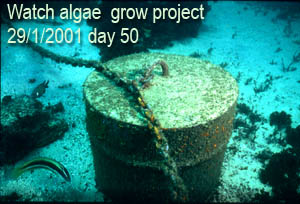 Can you believe it, after only 50 days the amount of algae and small critters growing on a cement block. 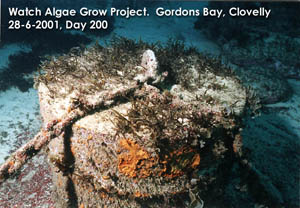 This is how it looked on day 200. 28th of June 2001. It's been more than 2500 days since then and it's time we took another picture. Algae are the general name for the chlorophyll-bearing organisms. Algae are predominantly aquatic inhabiting fresh brackish and marine waters. They may be free floating or attached. Substrates include rocks, outcrops, boulders, cobbles, marine pebbles, plants, including algae, boat bottoms, piers, foreshore steps, paths debris and even sometimes in sand and mud.

Our substrate at Gordon's Bay is our underwater nature trail which consists of twenty five drums filled with concrete and connected by chain, forming a guided dive just like a walking track in a national park.

Well you might argue how ugly but in fact because of the algal growth the trail in William Shakespeare's beautiful language has suffered a “sea change into something rich and strange.”

We hope you will agree after you have viewed George Evatt's magnificent photographs of algae growing, that watching algae grow is indeed more interesting than watching grass grow.